Arriving in Meshkin Shahr was the same story as Kaleybar, no/limited english, no tourist info centre, no map and an expensive hotel (and they were quite happy to pull my pants down). The English I did find, resulted in me being told there is only 1 hotel and that i should not climb the mountain as the road is a problem and it is dangerous. Fortunately, Mr Maleki came to the rescue for the second time; he hooked me up with a colleague in Meshkin Shahr who was able to take me to the garage where I could get a jeep up to the base camp (1.5hrs, 3500m, 550,000IR) and assured me that there was no problem climbing and it was actually the best time of the year. Should also probably mention Mt Sabalan is an inactive volcano and Iran’s 3rdhighest peak. Sweeeett!

I was a little concerned about altitude sickness (don’t know too much about it) as the town is at around 1500m, the base camp at 3500m and the peak at 4811m, which I was going to climb in one day and return back to town but i figured ‘she’ll be right!’. She was generally ok.

The climb was awesome, it was my first time above 3000m; i wasn’t expecting so much snow at the start of summer. Lucky i bought new Gore-Tex waterproof hiking boots in Istanbul, worked a treat, although my toes were quite numb after 6hrs in snow, even if i double socked it.

It’s a weird feeling above 4000m, you walk so slow, barely use any muscle/energy but your heartrate and breathing are going of their rocker. The climb took 4hrs to the top and 2hrs back down (involved a lot of intentional sliding down the mountain on my ass, epic fun). On the way down the weather did turn to shit though, snow and a lightning storm; probably explains why we did it in the time we did. During the climb, I met 3 blokes in their late 40s from Tabriz, one of whom had climbed Mt Sabalan 40 times; was a good idea to stay with them i think, fucken fit buggers though. About 3 hrs into the climb, i started feeling the effects of mild attitude sickness; headache, mild dizziness, lack of balance but there was no way i was turning around yet. The peak of the mountain houses a 50×50 frozen lake, which was covered in snow! Sad face. But it still made for an amazing feeling one you got to the top. One of the 3 i climbed with had brought up a thermos of hot tea, delicious. The lads also gave me a lift back to the hotel on the way home to Tabriz, cheers! 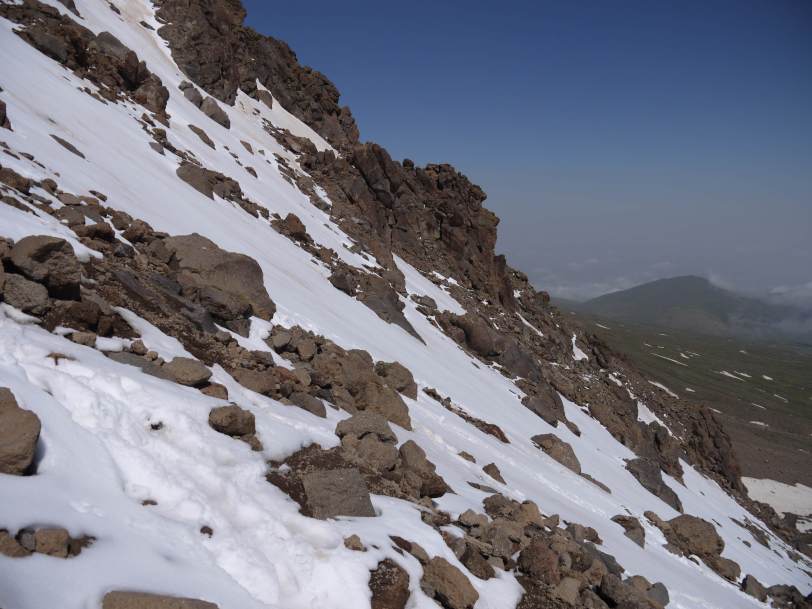